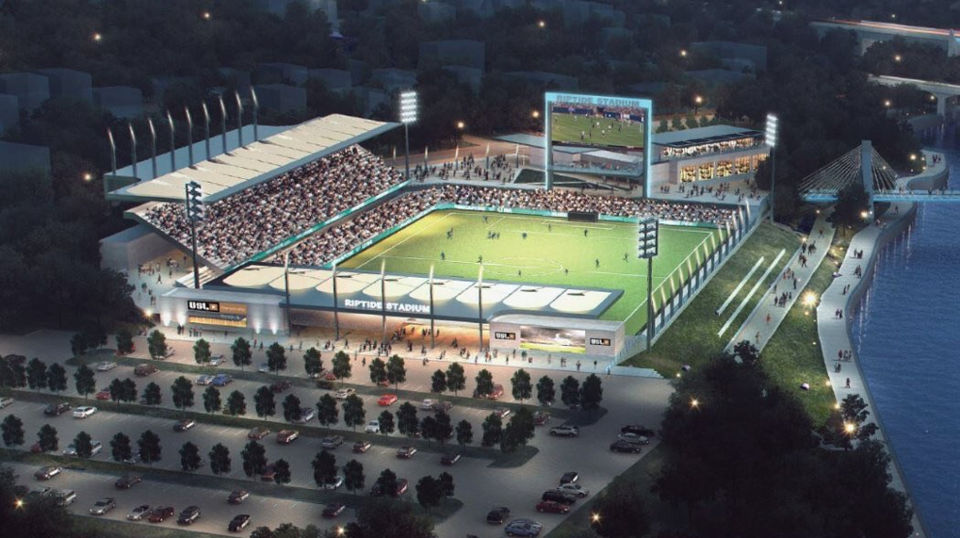 Guided by former Chelsea forward Didier Drogba, the newly minted Phoenix Rising FC advanced to the Western Conference quarterfinals in 2017 and reached the USL Championship the following season. Phoenix didn’t miss a beat after the Ivorian’s retirement, winning a record 20 consecutive games during the 2019 campaign en route to the USL Championship regular-season title.

Johnson, a co-chairman, was inspired by the club’s success and impact on and off the field.

“I started to think about other markets that would benefit from professional soccer,” Johnson said. “Rhode Island for a lot of reasons started to resonate at that scale. Coupled with the Opportunity Zone Program, I put the pieces together of how we could do sports-anchored real estate developments to create opportunity and change.”

Announced on December 2, 2019, Tidewater Landing is a $400 million economic development project along the riverfront in Pawtucket, Rhode Island, that will feature extensive development, highlighted by a stadium to host its new USL Championship franchise set to begin play in 2022.

Tidewater Landing will create more than 2,500 direct and indirect construction jobs and more than 1,200 ongoing jobs after completion.

The 7,500-seat multi-purpose stadium will not only house Pawtucket’s USL Championship team, but will be available for concerts and other sports including football, rugby, lacrosse and field hockey.

“The easy thing would have been to buy the rights to a USL franchise in Rhode Island, find a stadium, lease it and go from there,” Johnson said. “That’s the low-hanging fruit. Instead we’re creating a place where people want to live, companies want to be present, and people will visit for events and to eat and drink. It’s a 365-day-a-year destination.

“Places like L.A. Live have completely transformed neighborhoods. Our aspirations for Pawtucket are to create something similar.”

Initially launched in 2007, L.A. Live is the sports and entertainment district surrounding the Staples Center and Microsoft Theater in Los Angeles featuring various venues, nightclubs, restaurants, and attractions including a bowling alley, museum and movie theaters. The Battery Atlanta, which surrounds the Atlanta Braves’ Truist Park, similarly features everything from restaurants and candy stores to live music venues and a bull-riding-themed bar equipped with a mechanical bull.

More and more mixed-use destinations are popping up around the country, especially after the creation of Opportunity Zones by the 2017 Tax Cuts and Jobs Act. Designed to spur economic development and job creation in economically distressed communities, Opportunity Zones offer tax benefits to investors who invest eligible capital into the projects and communities.

This template is one the United Soccer League is utilizing as it continues to expand around the country.

“The USL views its teams as community assets,” USL COO Justin Papadakis said. “Contributing to local economies is a major part of our value proposition. Pawtucket is a great example of a stadium-anchored entertainment district we’re trying to create around the country.

“We believe there’s a fundamental change happening where consumers are looking for places to be when they leave their house and that they’d rather spend money on an experience than a physical product. The goal is to be the intersection of social interaction within our communities.”

Papadakis said the USL is currently in active conversations with 30 markets across the U.S.

Lawmakers in Albuquerque, New Mexico, approved $4.1 million in capital outlay that will allow New Mexico United to acquire land and plan designs for a downtown sports and cultural center. Louisville City FC is moving into its new 11,700-seat Lynn Family Stadium this season, while Colorado Springs Switchbacks FC and Charlotte Independence are expecting new homes for 2021. OKC Energy FC will move into a new $37-million, 10,000-seat stadium in the next decade, while proposals for a new, multi-purpose stadium in Spokane, Washington, are currently underway.

While each project and district will differ based on location and clientele—for example Phoenix Rising’s Casino Arizona Field can be utilized year-round based on more favorable weather than the new stadium in Pawtucket—one major feature will be present: a multi-purpose sports venue complemented by a variety of offerings including food, drink, shopping and stay for patrons.

Over the next five years, Papadakis said not only will conversations increase, but the league will feature “dozens and dozens” of sports-anchored entertainment districts across its top-two divisions—USL Championship and USL League One—either opened or under construction.

By the North American-hosted 2026 FIFA World Cup, he said there will be more than 100 high-quality professional stadiums and soccer clubs across 100 markets in the United States—30 Major League Soccer (MLS) teams and 70 USL teams in the Championship and League One.

“I’m a huge advocate of sports in general, soccer specifically, and what the MLS and USL are doing respectively and how it’s transitioning the landscape in this country,” Johnson said. “Especially with the 2026 World Cup on the horizon, soccer’s future couldn’t be brighter in this country.”